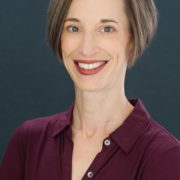 Guaranteeing Security: The Occupation of France after Napoleon

Since World War II, one key mechanism of “security culture,” especially in transitional periods after wars, has been peace-making operations or occupations. This was true of the post-war occupations of West Germany and Japan by the army of the United States, as well as of the more recent—and problematic—occupations of Afghanistan and Iraq by the same military. Peace-keeping occupations have also been an important tool for the United Nations in its efforts to ensure global security.

However, military occupation as a tool of “security culture” is by no means new, as other blogs by Beatrice de Graaf have also shown. In fact, it dates back more than 200 years, to the first modern peace-keeping occupation in France following the defeat of Napoleon. This first such occupation succeeded, because its leaders set clear goals, disciplined their troops, and cooperated with local authorities. Although largely forgotten by the turn of the next century, it was a model peace-keeping operation. 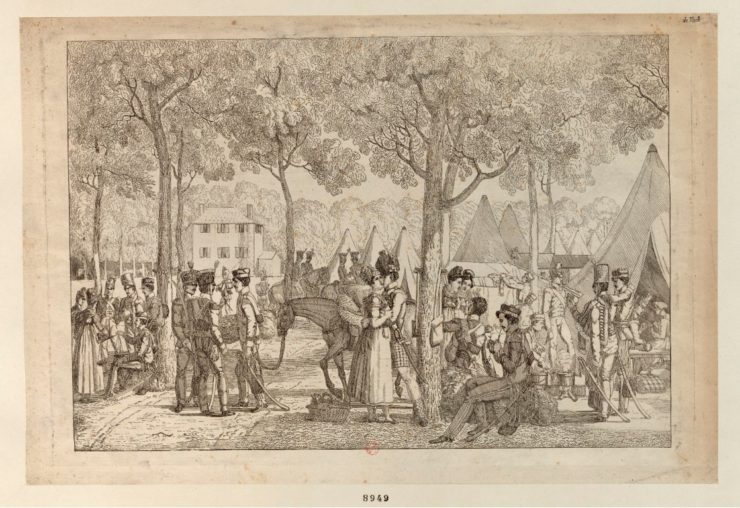 The Origins and Goals of the “Occupation of Guarantee”

The use of occupation for peace-making originated in the Revolutionary and Napoleonic Wars, which pitted France against most of the other powers of Europe between 1792 and 1815 (with brief breaks in 1802-1803 and 1814-1815). Before this period, victors had routinely conquered territories and demanded “contributions” from the powers they defeated. But during the new “total” wars that followed the French Revolution, victorious countries began to use military occupation as a tool to effect political “liberation,” or regime change, of the defeated nation. Napoleon embraced such tactics, though for him, “liberation” reassumed the form of imperial conquest. His definitive defeat at the Battle of Waterloo on June 18, 1815, prompted innovation, leading the Allied powers of Europe to invent a new sort of peace-time occupation, whose goals were to ensure that the defeated French maintain a stable government as well as that the victorious powers receive financial compensation for the costs they had incurred in fighting the former emperor.

This new approach to occupation developed gradually, in the context of a more traditional—and often brutal—military occupation of France. After Waterloo, the British and Prussian armies invaded the country, reaching Paris by early July. There they re-instated the exiled King Louis XVIII, who had ruled for barely a year between the Emperor’s first defeat in March 1814 and his return to power in March 1815. They were soon followed by troops from Austria, Russia, other states in the German Confederation, Denmark, and even Piedmont-Sardinia. By mid-July, some 1.2 million troops covered two-thirds of the territory of France, often engaging in pillaging and violence against local inhabitants. While these troops enjoyed living off the defeated French, their leaders sought to transition from war to peace. They faced the question of how best to ensure a durable peace – as well as financial reparations – for the nations of Europe.

Following several months of negotiations, the Allied diplomats and French foreign ministry agreed on a moderate approach to the peace. It was instituted in the Second Treaty of Paris, signed on November 20, 1815, whose main goals were to ensure “proper indemnities for the past and solid guarantees for the future.” Toward this end, the treaty required a temporary “occupation of guarantee” against revolution, until the French had fulfilled their financial obligations to the Allies. These financial requirements were substantial. In addition to paying the provisions, salaries, and equipment for 150,000 men and 50,000 horses and reimbursing the yet-to-be-determined claims of Allied subjects from the revolutionary and Napoleonic Wars, the French were required to pay a war indemnity, ultimately set at 700 million francs. Payment of this compensation was a precondition for the end of the occupation. To ensure the financial and political stability of the defeated nation, the post-Napoleonic settlement also instituted a Council of Allied Ambassadors, composed of the representatives of the four major powers allied against Napoleon (Russia, Prussia, Austria, and the U.K.), plus the commander of the occupying army when he was in Paris. Unprecedented in the law of war, this settlement marked a new approach to peacekeeping, whose goal was not to conquer but to reconstruct the defeated nation. Or, as the Duke of Wellington himself described it: “These measures will not only give us, during the period of occupation, all the military security which could be expected from the permanent cession, but, if carried into execution in the spirit in which they are conceived, they are in themselves the bond of peace.” 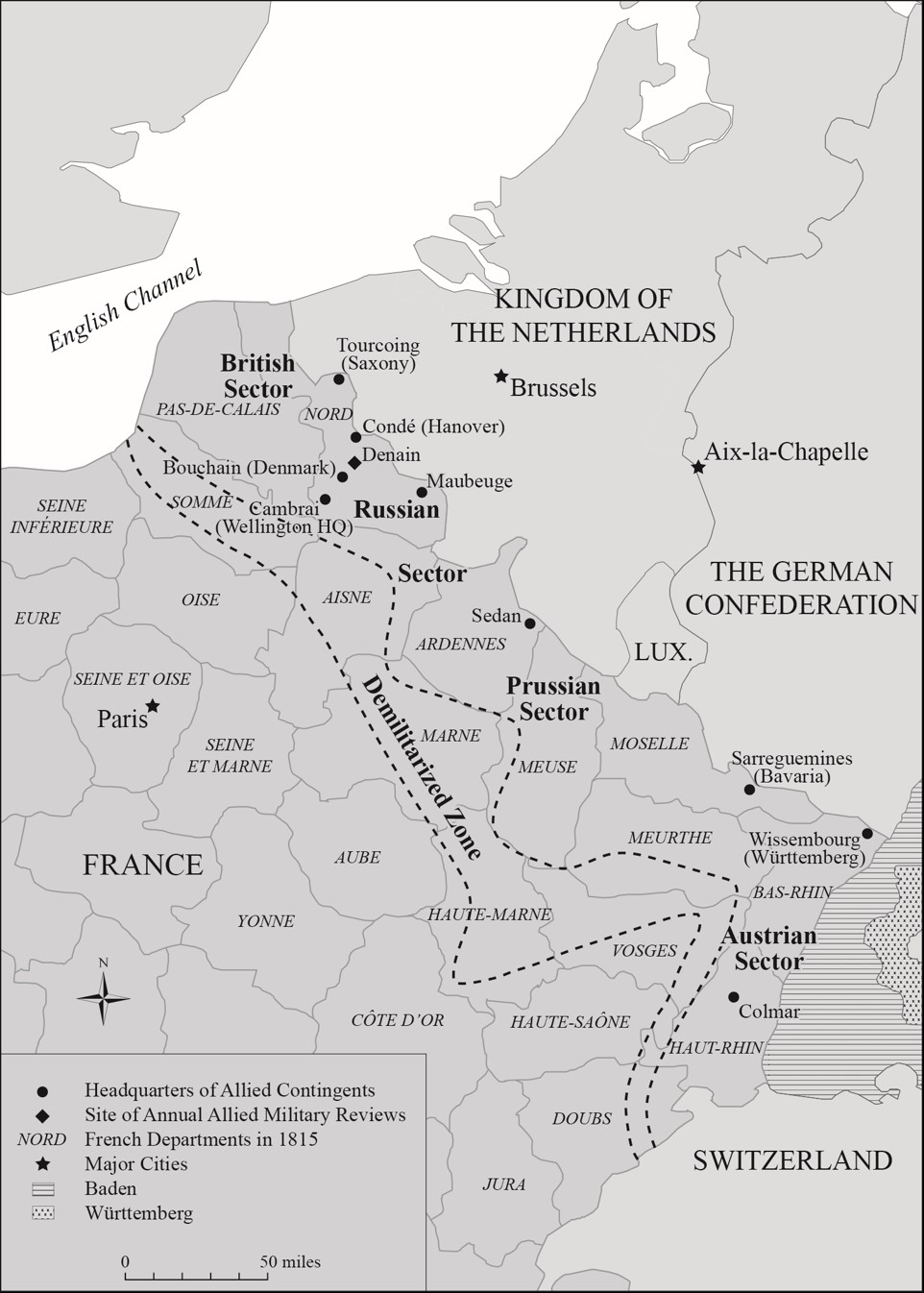 Northeastern France under the Allied Occupation

In this settlement, the key to guaranteeing security in France was the occupation force. Placed under the integrated command of the Duke of Wellington, this multinational peace-keeping force was the first of its kind. Stationed in and around 18 garrisons in seven departments along the northeastern frontier, the occupation army totaled 150,000 men: 30,000 from each of the four main powers—Britain, Russia, Prussia, and Austria—plus another 30,000 from minor German and Danish powers.

This occupation army was led by experienced and effective officers. Under the command of Wellington, the officer corps managed the occupation to minimize conflict between foreign troops and local French. In addition to systematizing the requisitioning process and housing as many soldiers as possible in collective barracks (rather than with individual inhabitants), they imposed tight discipline on their troops, strictly regulating drinking, dancing, smoking, and curfew. Violators were sanctioned by their superiors severely, often with corporal punishment. Generals such as Baron Jean-Marie Philippe de Frimont, in the Austrian sector, and Count Mikhail Semenovich Vorontsov, in the Russian one, earned reputations for their discipline, but also for their fairness and generosity with regard to local inhabitants. Vorontsov, for instance, issued strict orders against arbitrary requisitioning, smuggling of contraband, and hunting or fishing outside of the conventional seasons, and he asked local officials to report any “excesses” by his troops, so that he could investigate and punish them. Under his leadership, the Russian corps collected donations for local communities in need and organized balls, at which troops mixed with local women. 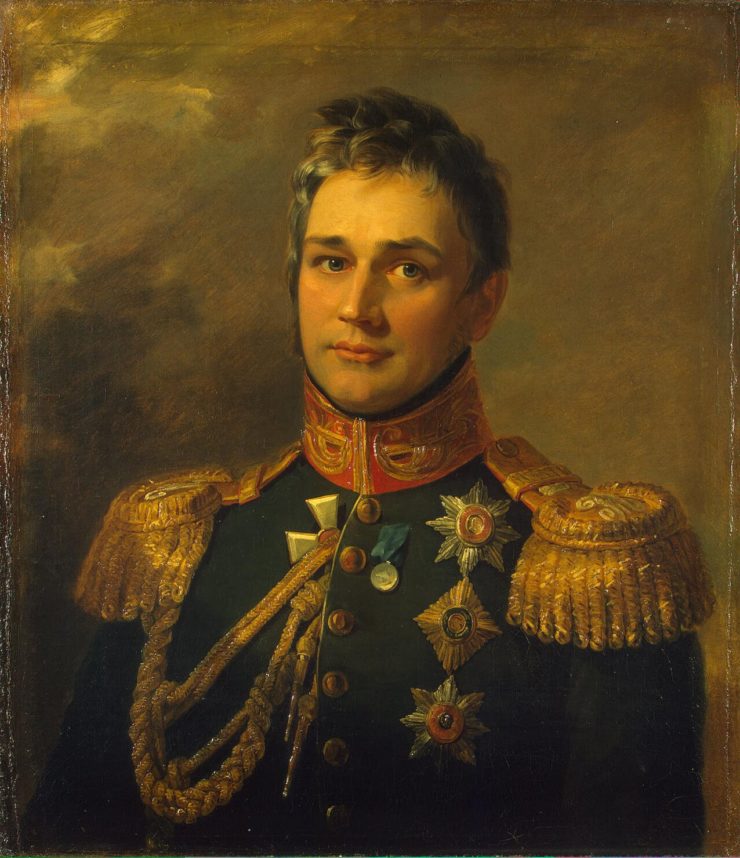 The occupation of guarantee was also successful in promoting cooperation between Allied forces and French officials. In line with the treaty of 20 November 1815, the Allies respected the sovereignty of the defeated nation, including in policing and customs. In some communities, Allied troops even cooperated with French gendarmes. Allied officers also socialized frequently with local elites, at military reviews, at public festivals, at regular dinners, and in masonic lodges. In the Austrian head-quarters of Colmar, for instance, General Baron de Frimont was a regular guest at salons hosted by the local prefect, the André de Biaudos, Comte de Castéja.

To be sure, the occupation of guarantee remained a considerable burden for the French, especially in the north-east, where most of the troops were stationed. In addition to financing requisitions and reparations through taxes and bonds, they were subject to random “contributions” in money and kind. They also endured considerable violence, including fights, brawls, murders, and rapes. However, Allied and French authorities worked to minimize violence and promote “good harmony” between occupying soldiers and local inhabitants through cooperative regulation and adjudication of any offenses. These efforts promoted considerable accommodation and even fraternization between occupiers and occupied.

Under pressure from the occupying army and the Allied Council, the restored monarchy moved quickly to re-build the government and treasury in France. In September 1816, the council pushed the king to dissolve the ultraroyalist Chamber of Deputies. In the elections that followed, conservatives lost seats to moderates. This move paved the way for a number of important liberal reforms regarding elections, military recruitment, the press, and the budget, which was especially important for financing the payments due to the Allies. The Allied forces in France did not make much of an effort to win “the hearts and minds” of the local inhabitants, as recent occupiers in other parts of the world have endeavored with mixed success. Nonetheless, they promoted the political and economic reconstruction of the defeated power. 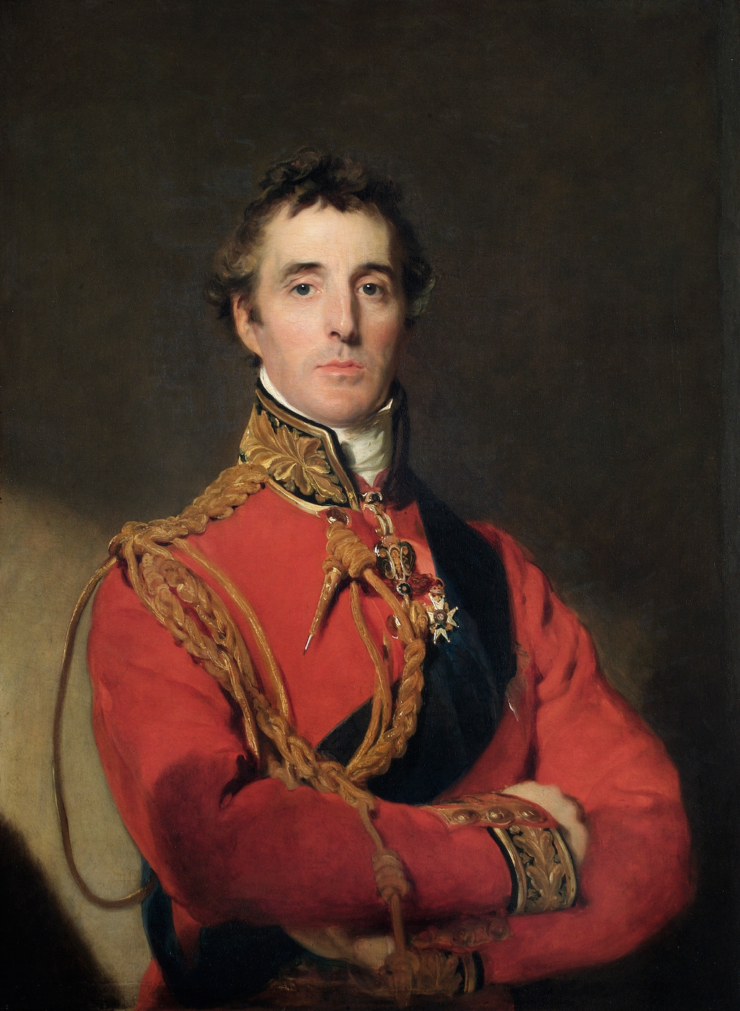 A Model of Peace-Keeping, Alas Forgotten

By early 1818, the French government convinced the Allied leadership that it was stable and solvent enough to end the occupation two years ahead of schedule. At a congress at Aix-la-Chapelle (Aachen) in Prussian territory, following negotiation over the final payments of the reparations required by the Second Treaty of Paris, the Allies agreed to evacuate France by the end of November.

In the end, the “occupation of guarantee” was one of the most successful peace-making operations ever. This occupation was successful for many reasons. It was genuinely multilateral in composition. Yet unlike in some more recent occupations, even though the occupying troops came from many nations, their leaders could almost all communicate in the language of the occupied. The architects of the occupation established clear goals for it, from the beginning. In contrast to the initial military occupation of the summer of 1815, the “occupation of guarantee” guaranteed the sovereignty of the new government. The occupying powers made effective use of existing institutions, and they enlisted cooperation from local authorities to mediate between occupying forces and occupied communities. The occupation also had effective leadership, especially in the occupation’s commander-in-chief the Duke of Wellington, who had learned from his previous experiences in India and Spain.

Alas, the lessons of this first modern peace-keeping mission have often been ignored by subsequent occupiers, at great expense. The lack of historical memory and preparation is all too apparent in Afghanistan and Iraq, where lives continue to be lost among both allied forces and civilian populations, years after the initial invasions. In their efforts to achieve security through occupation today, military and civilian planners would do well to study the origins of this tool in the “security culture” constructed by the Allies against Napoleon after 1815.

CHRISTINE HAYNES is Professor of History at the University of North Carolina at Charlotte. She is the author of Our Friends the Enemies: The Occupation of France after Napoleon, which is available here.