Underneath the Skyscrapers. The social learning of professional tourism

The city of New York has always attracted newcomers and travelers. They came because they were mesmerized by the city in search of a better life, wanted to be part of its astonishing atmosphere, or simply because they were lucky enough to be invited by colleagues in Manhattan. One of those travelers was Rotterdam’s chief commissioner of police, Willem Voormolen (1856-1909), who crossed the Atlantic on board the Holland America Line’s SS Statendam in July 1901. Thanks to his personal photo album, we gain an interesting insight in his voyage. The pictures detail everything from brass ensembles to social encounters in the salon, from lazing deck days to interactions with groups of migrants bound for Ellis Island. His photographs also show us the skyline of turn-of-the-century Manhattan, including recently completed landmarks like the Statue of Liberty and the Brooklyn Bridge. While his hometown possessed Europe’s tallest office building, Broadway’s skyscrapers were beyond his imagination. However, Voormolen’s journey was not merely of a touristic nature. He primarily looked at the city through a professional lens. More recently, four members of the ERC SECURE research group, Beatrice de Graaf, Susanne Keesman, Wouter Klem, and Erik de Lange also crossed the Atlantic – following in Voormolen’s footsteps. Their modes of transportation were more modern and fast than those of the police chief, but their purpose was of a comparably professional nature.

Voormolen had crossed the Atlantic to acquaint his colleagues at the Police Departments in New York and Chicago. The organization of the water divisions and the policing of migrants in these cities received much of his attention, as such matters resembled the situation in Rotterdam. Voormolen exchanged expertise with his counterparts. They all learned from each other’s experiences and engaged in epistemic interactions to improve their policing profession. Foreign visits were a mechanism of social learning that contributed to Voormolen’s professional network. It hence is comparable to the recent experiences of the ERC research team.

When the members of the ERC SECURE group recently crossed the Atlantic, they had the chance to compare Voormolen’s photographs with current-day views in an attempt to distinguish continuities. More importantly, however, they also had a professional objective: the presentation of the group’s research findings during a book launch at Columbia University. 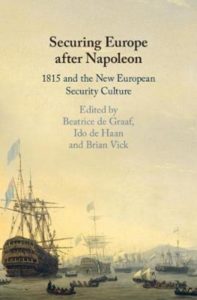 The Cambridge volume Securing Europe after Napoleon: 1815 and the new European Security Culture (2019), edited by Beatrice de Graaf, Ido de Haan and Brian Vick, was launched in a packed Buell Hall on the Columbia campus – co-sponsored by the University’s European Institute, the Studies of the Dutch-Speaking World, the Department of History, and the Maison Française. The volume is a landmark for our ERC research project: drafts of the contributions were first discussed at the project’s 2014 opening conference ‘Vienna 1815: The making of a European Security Culture’. In the years that followed our understanding of the security culture deepened. Thanks to discussions with scholars abroad, this deepening conception resulted in initial steps towards a global perspective on historicizing security, including non-European notions of security cultures in the nineteenth century. We can clearly distinguish differences between the predominantly European outlook at the project’s opening conference, and the broader security focus of our upcoming closing conference, ‘Cultures of Security in the Nineteenth Century. Transimperial Perspectives’, to be held in Utrecht, 9-10 May 2019. The volume presented in New York and the discussions that followed not only demonstrated our widening understanding of security cultures, it also shows the value of maintaining professional networks beyond borders through meetings and conferences.

After the opening words by Adam Tooze, the volume’s editors took the floor in Buell Hall. First, Beatrice de Graaf introduced the aims of the ERC research project and particularly mentioned the security culture that emerged at the 1815 Congress of Vienna. The analytical focus of the security culture concept, she explained, is sharpened by the use of an interdisciplinary terminology drawing from security studies (framing or ‘labelling’, ‘silenced voices’) and social sciences (‘professional agents’ and ‘social learning mechanisms’). The actors who brought professional understandings to the diplomatic floor and discussed and negotiated security hold a central place in this research. De Graaf emphasized the importance of social learning mechanisms and the felt urge of historical actors to come together in peacetime and moments of crisis. Ido de Haan continued by exemplifying the workings of professional networks and social learning in concerted policing efforts, geared against alleged revolutionary conspiracies in the Restoration era. Finally, Brian Vick concluded with stressing the additional value of the focus on security cultures, notably the inclusion of a wide range of political, professional and other actors, like women who formed social hubs by organizing soirées. Vick emphasized how the value of this focus to uncover the reciprocal influences on mindsets and political goals serves as a means to bypass false distinctions between the national and international.

The Statue of Liberty, photo by W. Voormolen, source: SAR 549

Sharing mechanisms with the past

Book launches and international meetings like ours at Columbia, as well as the making of the book itself (with contributions by sixteen scholars from six nationalities appointed to ten universities), professional visits, and exchanges of thoughts and ideas all visualize the very mechanisms of social learning that we also study historically. Realizing how little our present mechanisms differ from the past actually strengthens our historical understanding. When we study past networks – defined as ‘evolving associations of varying size, intensity, density and geographical reach’ – we would do well to highlight time-spanning similarities. Transnational encounters in previous centuries were, just like today, characterized by social elements such as dinners, sightseeing, or even nightly strolls through Manhattan – rather than consisting merely of ‘serious’ or ‘high’ politics. Much like Voormolen’s trip to New York and Chicago in 1901, our own visit to New York (together with previous and upcoming conferences) help us in our epistemological development. Transnational discussions and professional encounters at Columbia University, in Amsterdam, Utrecht and many other places, nurture our professional development. Our grasp of history begins by understanding today, and vice versa. 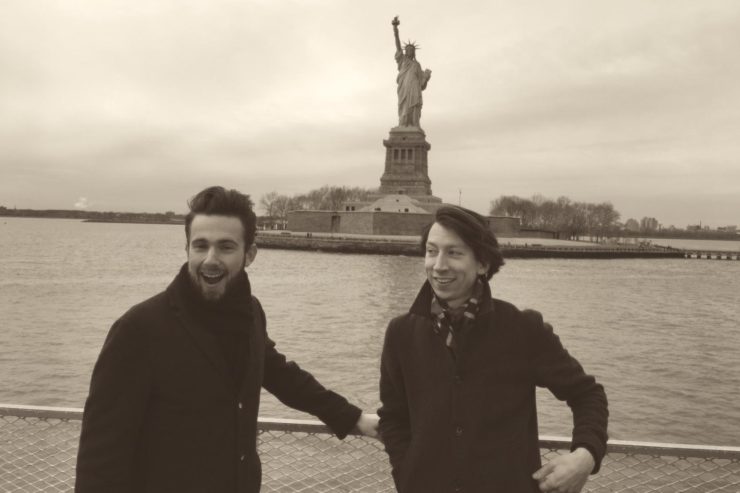 The author and editor of this blog tracing Voormolen’s footsteps, photo by S. Keesman