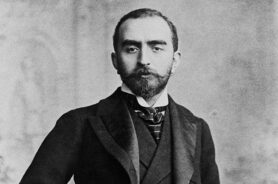 On 25 March the Turkey Studies Network in the Low Countries external linklaunches its Spring Series seminars with a lecture by Dr Jonathan Conlin (University of Southampton) titled ‘Gulbenkian: Refugee, Oil Man or “Citizen of Nowhere”?’ about the extraordinary career of Calouste Gulbenkian.

In 1955 in Lisbon, Calouste Gulbenkian died as the world’s richest man. He was widely known as “Mr Five Per Cent” on account of his personal holding of 5% of Middle East oil production. Gulbenkian not only survived the collapse of the Ottoman Empire into genocidal violence as an Ottoman Armenian but managed to establish himself as a key middle-man in the emergence of a modern cartelized oil industry, helping to create the giants we know today as Royal Dutch-Shell and Total.

In this lecture, Conlin traces Gulbenkian’s career as “oil man”, art collector and philantrophist, and reflects on his multiple loyalties as refugee, diplomat and rootless “nowhere man”. Conlin teaches history at the University of Southampton an published his award-winning biography of Gulbenkian in 2019. This online event will be coordinated and moderated by Dr Ozan Ozavci external link(History and Art History external link), one of the founders of the TSN.