President Abdel Fattah al-Sisi did not mince words when he stated that, for Egypt, the Nile was ‘a matter of life and death’. He added: ‘no one can touch Egypt’s share of the water.’ 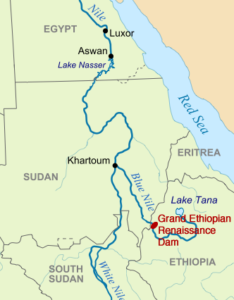 Map of the dam within the region. (source: Wikimedia Commons/Yale e360)

On 15 November 2017, the government issued a statement that affirmed it would ‘take the necessary measures at all levels, since water security is central to Egypt’s national security.’ What was all this tough talk about? In 2011, Ethiopia started the construction of the five billion Dollar Grand Ethiopian Renaissance Dam (GERD). A clever move, as Egypt was stirred by a revolution and could not interfere. Addis Ababa claims it needs the 6,450 MW dam to maintain its economic development. Cairo, on the other hand, fears Ethiopia will close off the Nile, which carries 97 percent of Egypt’s fresh water supply. Now, with the political dust in Egypt somewhat settled and the completion of the Ethiopian Dam in sight, al-Sisi is up in arms. Yet, before bringing the diplomatic conflict to a climax, al-Sisi might learn from another river dispute, which took place some 200 years ago.

Egypt appeals to two agreements that were concluded in 1929 and 1959. The first, a treaty between Egypt and Anglo-Egyptian Sudan, acknowledges Egypt’s alleged historic rights in the Nile waters and grants the country an annual water allocation of 48 out of a total of 84 billion cubic meters. In addition, it allowed Egypt to have veto power over any construction project on the Nile – within, or beyond its borders. The second agreement increased the water share for both Egypt and Sudan. Neither agreement, however, took into account the other riparian states; such as Ethiopia, through which 80 percent of the Nile water runs.

In the past, Egypt has threatened with violence to protect these water rights. The governments’ statement of 15 November might be understood in a similar vein. Undaunted, the Ethiopian government does not feel restrained by such historic ‘rights’. These, after all, are products of the colonial era, based on an asymmetric distribution of power rather than a fair distribution of the water resources. ‘We are not concerned by what Egypt thinks – Ethiopia is committed to benefitting from its water resources without causing harm to anyone,’ the Minister of Irrigation, Water and Electricity said.

From rivalry to cooperation: the Rhine in the 1800s

When the political and economic balance of the international system shifts, conflicts are bound to happen. Egypt was caught in political turmoil, Ethiopia’s economy jumpstarted; in this changed context, the two states find themselves now at odds over historic rights. An example from an unexpected angle may show the salience of such a shift. In the 1820s, the Netherlands and Prussia became immersed in an unprecedented diplomatic struggle over the Rhine. Just as the Nile today, the river Rhine had been a hotbed of all kinds of conflicts and disputes on water rights. It is hard to understand how that area of the now very peaceful world was far from irenic in the 1800s, and how hard the riparian states had to work to find peaceful solutions and compromises for their conflicts. But they did.

In 1815,  at the tail end of the Napoleonic wars, representatives of the European powers convened in Vienna. Aiming to facilitate commerce and stimulate much needed economic development, they confirmed the principle of freedom of navigation of international rivers. With regard to the Rhine, the most important navigable European river, a commission was installed that was to safeguard the principle and lay down uniform regulations for navigation. Yet, the Central Commission for the Navigation of the Rhine was quickly paralyzed by quarrels between Prussia and the Netherlands over the exact scope of ‘free navigation’.

King William I. Keeper of the Rhine

Similar to al-Sisi, King William I of the Netherlands reverted to the Dutch historic rights of the Dutch as keepers of the Rhine’s estuary. Hence he continued the old policy of taxing foreign ships on the passage to and from the sea. After all, the King argued, these parts could be regarded as the ‘sea’ because the tides were still visible. The principle of freedom of navigation on international rivers would therefore not apply. Such a legalistic – but not incorrect – explanation of the principle safeguarded important Dutch revenues. At the same time, it heavily affected Prussian policies of economic development in the newly acquired provinces along the Rhine. More so, it upset the liberal spirit of the Vienna accord.

The diplomatic conflict continued for years and turned into a public debate. In 1827, an impressive two-hundred-page German pamphlet appeared, addressed to the Dutch States General and ‘to the enlightened segment of the Kingdom’s merchants’. Its author argued that by continuing the restraining regime, the Netherlands would not only harm the Rhine trade, but also the entire commercial position of the Dutch economy. French and German seaports were starting to become competitive and new canals were opening up their respective hinterlands to international trade. The German pamphleteers warned the Dutch: commerce itself was like a river: once deviated, it was almost impossible to return it to its former course. For fear of losing the transit trade to competitors altogether, the Dutch backed down and in 1831 the Treaty of Mainz fixed the Dutch transit taxes on a lower, internationally competitive level. 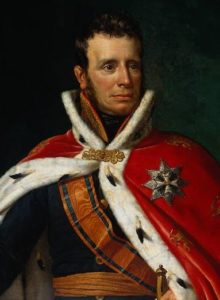 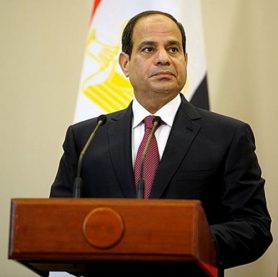 There are many differences between the Rhine case in the 1820s and the Nile case today. Still, we, or al-Sisi, might learn something from it. The Dutch stance on the Rhine tariffs shows that legalistic arguments become worthless when changes in the physical environment make their enforcement impossible or futile. In the case of the Rhine, the construction of canals in other European countries endangered the Dutch transit trade and forced William I to drop his legalistic stance. In the case of the Nile today, the Dam’s construction is steadily progressing. 8,500 labourers are working on it in three shifts, 24/7. The completion of the Dam is planned for the end of the year. Al-Sisi hence may want to turn more cooperative and let go his appeals to (historic) water rights, or his tough talk could soon become an ignored howl in a lonely desert.