New volume on Shaping the International Relations of the Netherlands, 1815-2000 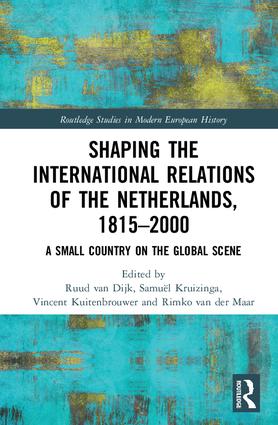 Joep Schenk, Erik de Lange, Beatrice de Graaf and Wouter Klem recently contributed to a new volume on Shaping the International Relations of the Netherlands. The volume is edited by Ruud van Dijk, Samuël Kruizinga, Vincent Kuitenbrouwer and Rimko van der Maar. The book seeks to launch a new research agenda for the historiography of Dutch foreign relations during the nineteenth and twentieth centuries. It does so in two important ways. First, it broadens the analytical perspective to include a variety of non-state actors beyond politicians and diplomats. Second, it focuses on the transnational connections that shaped the foreign relations of the Netherlands, emphasizing the effects of (post-) colonialism and internationalism. Furthermore, this essay collection highlights not only the key roles played by Dutch actors on the international scene, but also serves as an important point of comparison for the activities of their counterparts in other small states.

Joep Schenk – National interest versus common interest: The Netherlands and the liberalization of Rhine navigation at the Congress of Vienna

Joep Schenk demonstrates that the new European order during and after the Congress of Vienna in 1814-1815 was not just determined by the Great Powers. A small nation, such as the Netherlands, played a significant part in drafting and implementing at least 2 key results in terms of institutionalized international cooperation that flowed from the Congress: the declaration of the principle of freedom of navigation on international rivers and the constitution of the Central Commission for Navigation of the Rhine. His article shows that the way European economic interests and Dutch national interests were interpreted hinged not just on Dutch officials, but also on non-state actors.

Erik de Lange – Algiers burning: The United Kingdom of the Netherlands and the post-Napoleonic European order of peace and security

Erik de Lange zooms in on the bombardment of Algiers in 1816, carried out by a combined Anglo-Dutch fleet. this devastating cannonade forced regent dey Omar Agha to issue a declaration forever renouncing Christian Slavery. He argues that the bombardment of 1816 must be situated in the context of post-Napoleonic European security politics, which was not simply dominated by the Great Powers as is often assumed. De Lange not only stresses the role of non-state actors in this matter, but he also draws attention to the often overlooked Dutch involvement in imperial interventions in the Mediterranean at the beginning of the nineteenth century that were carried out under the banner of security.

Beatrice de Graaf and Wouter Klem – Joining the international war against anarchism: The Dutch police and its push towards transnational cooperation, 1880-1914

Beatrice de Graaf and Wouter Klem discuss Dutch reactions to anarchist terrorism in the last decade of the nineteenth century. They primarily focus on the efforts of police officials to counter this transnational threat. Several Dutch police officials attended international anti-anarchist conferences in 1897 and 1898, where they successfully lobbied for harsh measures. By doing so these actors, who did not belong to the Dutch diplomatic corps, managed to leave their mark on Dutch international relations at the turn of the twentieth century.