Joep Schenk: ‘The Rhine and European Security in the Long Nineteenth Century. Making Lifelines from Frontlines’

While many will place the origins of the United Europe as a peace and prosperity project in the 1950s, Joep Schenk’s new book shows that the foundations of this project were laid much earlier, on February 2, 1815. 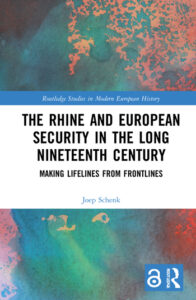 On that day, 206 years ago this week, delegates from the four superpowers France, Prussia, the United Kingdom and Austria met for the first time at the Congress of Vienna to negotiate the introduction of the principle of free navigation on the Rhine. In 1815, the European powers considered international river policy indispensable to the commercial well-being and future security of the blown to pieces continent.

The consultations resulted in a comprehensive list of conditions that was incorporated in its entirety into the Vienna Final Act. But even more important was the establishment of the Central Commission for the Navigation of the Rhine immediately thereafter, consisting of delegates from the seven riparian states. The first (and still existing) International Organization of Modern History would be dedicated to the protection of the principle of free navigation on the Rhine.

The Rhine and European Security in the Long Nineteenth Century. Making Lifelines from Frontlines (Routledge 2021) examines how the most fundamental change in the history of international river management stemmed from European security concerns. In addition, it shows how the Central Commission for the Navigation of the Rhine (CCNR) functioned as an ongoing experiment in reconciling national and common interests that contributed greatly to European welfare development during the long nineteenth century. Thus, the book shows that conceptions and practices of security in the long nineteenth century as well as in the second half of the twentieth century cannot be understood without taking into account welfare considerations and welfare policies.

The study, which was part of Beatrice de Graaf’s ERC project Securing Europe, fighting its enemies, made use of archives in Britain, Germany and the Netherlands, as well as the recently opened CCR archives in France. The research did not limit itself to the usual suspects such as statesmen and high diplomats, but also zoomed in on less obvious actors such as experts, radicals, entrepreneurs and of course the delegates in the CCR itself.

Joep Schenk is a lecturer in the History of International Relations section at Utrecht University. He worked as a post-doc within the ERC project Securing Europe, fighting its enemies of Beatrice de Graaf. He is currently doing research on international environmental cooperation in a historical perspective.

For more information on the book, you can visit the website of the publisher.