Historical Narratives and National Interests, or: on the Orwellian Characters of Eastern Europe

17 January 2017 is a day to remember for Mr. Igor Dodon, Moldova’s newly elected president. During his visit to Moscow, he met Vladimir Putin, whom he deeply admires. In fact, during the presidential campaign, Mr. Dodon honestly acknowledgedthat he would like to be ‘a dictatorial leader, the same as Putin.’ This intention reflects his resolve to be a strong statesman, able to guide one of Europe’s poorest countries towards a more prosperous future.

Mr. Dodon knows that a bright future starts with (or in) the past. The new president’s historical identity politics have an almost literary bend to them. In a peculiar adaptation of George Orwell’s 1984, Mr. Dodon seems intend to transfer the infamous Ministry of Truth from the book pages to Moldovan politics. The institution that Orwell described depended on protagonist Winston Smith’s work as a clerk at the Records Department of the Ministry of Truth, where he adjusted historical sources to make them match with the changing political views of the party leadership. Aiming to recreate the truth centre, Mr. Dodon is now looking for diligent Winston Smiths to assist him in revising his country’s past and future.

The symbolism of historical gifts

On a recent trip to Moscow, Mr. Dodon presented the Russian president with a statue portraying Tsar Peter the Great and Moldavian Prince Dimitrie Cantemir, who joined arms in 1710–1711 to form an anti-Ottoman coalition. Cantemir, an enlightened ruler and a scholar of European fame, sought refuge in Russia after 1711. He tends to return from the past whenever it seems necessary to cement cooperation between Russians and Moldovans (or Romanians). The gift was therefore symbolic of Mr. Dodon’s promise to restore close political and economic ties with Russia and join the Eurasian Economic Union once his Socialist Party wins next year’s parliamentary elections.

Mr. Putin returned the favour by presenting his political aficionado with a chess board and a map of the principality of Moldova. Drawn by Italian cartographer Bartolomeo Borghi in 1790, the map carries a clear political message. It depicts the principality as an Ottoman vassal state after its northern part was annexed by the Austrians in 1775. This province is now part of Ukraine, just like another (southern) portion of premodern Moldavia, whose strategic importance for controlling the mouths of the Danube made it often change imperial masters. Through the Treaty of Bucharest (May 1812), which ended the Russian – Ottoman war of 1806–1812, Russia annexed the eastern half of the principality. The other half merged with Wallachia in 1859 to form modern Romania. Looking at President Putin’s gift during a press conference, Mr. Dodon regretted that Russia had stopped at the Pruth river, forced by Napoleon’s imminent Russian campaign, and did not manage to save the entire Moldovan territory. Moldova is now a split country, with parts of it seized by Romania and Ukraine. Its only independent section is that taken (or freed) by Russia in 1812. 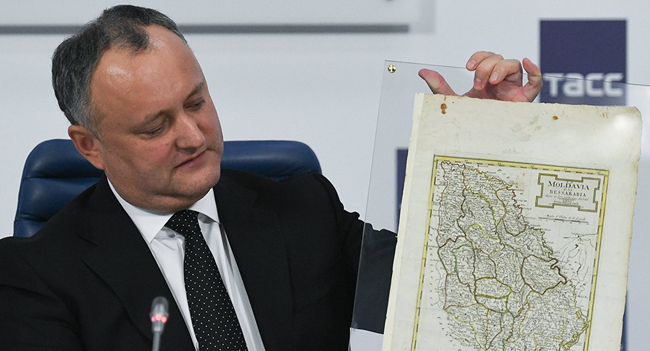 A historical map and its current political symbolism, source: day.kyiv.ua

Let’s make Romania great again and its reception in Moldova

Mr. Dodon’s pro-Russian position is shared by many of his political supporters, who argue that Moldovans, above all, need to be cautious of vicious Romanian identity politics. Romanian–Moldovan relations are embedded in a complicated historical narrative exacerbated in both countries by current political factors and the national celebrations to come. After a century of Russian rule, a Moldovan republic emerged from the ashes of the disintegrating Tsarist Empire in 1917, but its leaders eventually voted for union with Romania in 1918.

During World War Two, the Soviet Union reannexed the province, which again sought independence when the Soviet Union dissoluted in 1991. Since then, the country looked alternatively West and East for support in its difficult post-communist transition. From 2009 Moldova had been governed by a pro-European coalition, but a new president was elected in November 2016. One of Mr. Dodon’s main messages was to improve economic and political relations with Moscow.

A century on, the events of 1917 still carry a major national symbolism for both Moldova and Romania. Common language, history and culture have been the main pillars of Romanian arguments that Moldovans are really just alienated compatriots. Many Romanians, and significant numbers of Moldovans too, consider the restoration of Greater Romania to its interwar size a national duty for the decades to come. Romania heavily invests in educational and cultural programs meant to preserve Romanianism in neighbouring states, especially in Moldova. Lately, this tendency has also gained political traction, and it has become the ultimate goal of several political parties to re-unite Romania and Moldova.

In Moldova, such political desiderata are understood differently. Some Moldovans that consider themselves to be ethnic Romanians, support the idea of union. Others refer to the Moldovans’ separate identity as a civic nation that includes various ethnicities and religions. They acknowledge that Moldovan and Romanian history and culture often overlap, but they insist that Moldova is an independent state and should remain as such. For the large Russophone population of Moldova – and for its Gagauz and Bulgarian minorities too – Romanian nationalism is the real threat to the country’s independence. Closer ties with Russia are considered the best insurance against the dangers of a Romanian annexation. With his revised historical discourse, Mr. Dodon definitely speaks this language as well.

During his visit to Russia, Mr. Dodon also launched at the Moscow Institute for Political Studies a new version of the ‘History of Moldova’ and shared his own vision on the role of history in nation and state-making. At present, pupils in Moldova study subjects called ‘Romanian language and literature’ and ‘Romanian history’ – subjects that Mr. Dodon thinks will be confusing for the identity of future Moldovans. As a supporter of Moldovenism, he insists on his country’s separate existence, as a state and nation that emerged separately from the Romanian (Wallachian) one. His approach touches on several of the historical myths in the formation of the Romanian nation, and thus inflames the pro-Romanian hardliners in both Romania and Moldova. In a recent letter of 16 March 2017, Mr. Dodon asks his country’s prime-minister to replace ‘Romanian history’ from the curricula, as it maintains tensions and ‘uncertainties regarding the future of the Moldovan state.’ For now, he has no political majority to impose this revision, but things may change after the elections next year.

2017 and 2018 come with centennial celebrations for Moldova and Romania, and contesting historical narratives put forward by respective political leaders will probably continue to clash. History is heavily instrumentalized in Eastern Europe, and Winston Smiths are wanted in Chișinău or Bucharest to correct the past and make it correspond to the vital interests of current and future political leaders.