Bursting the Bubbles: On the Peace of Westphalia and the Happiness of Unlearning

Post-colonialist scholars tend to be known as ‘grumpy’ people. In almost every academic meeting, be it a conference, workshop or a departmental gathering, you might find at least one of these scholars critiquing, if not preaching to, the others about the pitfalls of taking the western experience for the universal and the dangers of disregarding the importance of the voices and experience of ‘the rest’. Sometimes they are being unfair to their ‘Euro-centric’ colleagues who do not have access to sources for linguistic or logistical reasons. Last September, during the Historikertag in Munster, the roundtable on the Peace of Westphalia (1648), which has long been considered the foundational moment of the international state system, hosted at least two of these ‘grumpy’ scholars as speakers: Professor Remco Raben and the author of this blog. Our take on Westphalia may help clarify where the post-colonialist ‘grumpiness’ comes from.

When I was doing my first degree in Political Science and International Relations in the early 2000s, one of the first things we were taught was the fact that the 1648 peace inaugurated a modern system of sovereign independent nation-states. “1-6-4-8,” our freshman-year professor had written on the board, and told us to always remember this date if we wanted to comprehend the workings of international politics. I did. But over years the more I read about the history of the discipline of IR and its empirically ungrounded theories the more I grew away from it. I also grew more suspicious of the universal relevance of the Peace of Westphalia. 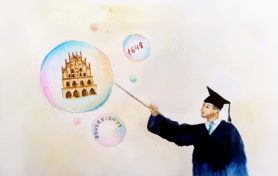 ‘The Westphalia Bubbles’, painted by Yulia Kozak for this blog

It was therefore a great pleasure and learning experience to attend a roundtable panel about it last September along with accomplished scholars such as Professor Raben, Professor Christoph Kampann and Professor Johannes Paulmann. Diligently organised by Professors Renate Dürr and Beatrice de Graaf, the first speaker of the panel was Kampann, a specialist in 1648. He reminded us that the settlement in fact limited the sovereignties of numerous states of the Holy Roman Empire, and therefore the prevailing argument that the 1648 peace inaugurated a modern system of sovereign independent nation-states in Europe was misleading. Paulmann, for his part, argued that in 1648 a state-system did not unfold per se but it was in the making. As a specialist in postcolonial Indonesia, Raben argued that the European interpretations of Westphalia had little relevance to the non-Western world, its histories and state system. 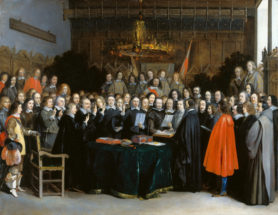 My take on 1648 was more or less complementary to what Kampann and Raben maintained. I said that as a historian of European and Middle Eastern entanglements, I saw at least two Westphalias that need to be treated differently. The first contains the histories of 1648: its origins, the diplomatic techniques deployed at the time, the peace-making mechanisms introduced, the treaty contents drafted and the resulting outcomes, such as the collective security system that it brought about. This first Westphalia might allow for useful comparisons and help us utilise the 1648 experience as a toolbox to address present-time conflicts that emerge from comparably complex power relations. I believe that such ventures need to be undertaken with great caution due to numerous contextual differences. They nonetheless need to be endorsed, as they prove the importance of the humanities in grappling with present-day social problems.

The other Westphalia, the second one, I continued, was what a new generation of writers such as Benno Teschke call a “myth” or a “narrative”. This was the Westphalia that I had once been taught to consider as the origin of the modern system of sovereign, secular and independent nation-states. 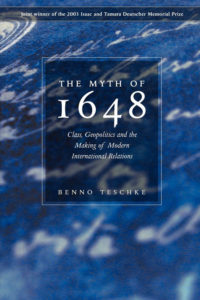 We know today that the idea of Westphalia as the origin of the international state system gained prominence in the nineteenth century. We also know that “Westphalian sovereignty” is a knowledge bubble or a misnomer, and the separation of church and state occurred in Europe only in the nineteenth century, albeit imperfectly. Its historical role has therefore long been discounted by critical post-colonialist scholars, who believe that ‘the narrative’ served to substantiate what is now called ‘European exceptionalism’.

The underlying idea of this ‘exceptionalist’ reading of history is that non-western societies remained in political turmoil and religious intolerance in the absence of a Westphalia-like arrangement. European exceptionalism idealised the European system (or miracle!), and divided the world between those who belonged to the international system, the family of nations in the nineteenth century, and who did not, depending on whether or not they met certain standards, whether or not they were ‘civilised’.

If the narrative on ‘Westphalia’ is so misguided and reductive, then why has it swept through the discipline of IR and persisted to this day? I believe that answering this question entails re-thinking the processes of historical knowledge production and knowledge circulation in imperial spaces in the nineteenth century, when the ‘narrative’ was largely formulated. It entails tracing the continuities of these practices to present time. Empires and imperialism have not only been the central vectors of a selective and positivist international law, they have also been transmitters of ideas, ideologies, mentalities and history-writing. Answering the question therefore also necessitates distilling our interpretations of IR from a west-centric, hierarchical, expansive and asymmetrical empire of knowledge, within which IR historiography and theories were born, and which appears to persist in our textbooks at all levels of education, as Rachel Gillett has recently shown in another blog. It requires re-writing and reading histories, including that of the Westphalia narrative, and an unlearning process in neighbouring disciplines such as IR and Security Studies.

The prospect of a more egalitarian reading of history not only emphasizes the real socio-political value and importance of the humanities, but it also partially explains why post-colonialist scholars act how they act. What they like to do is actually not much different than bursting the bubbles of knowledge with a childlike excitement. Behind that ‘grumpy’ appearance, there is, in fact, a joyful ambition.