Averting the Java War? Clashes over peace, profit and Dutch colonial government in 1825

The turmoil in Europe during the revolutionary and Napoleonic period also wreaked havoc in the colonies. One example is the island of Java, a colonial holding in the Dutch Indies. A recent book on colonial warfare in Indonesia drew my attention to the period 1816-1826, specifically to the figure of Godert van der Capellen, who was the first governor general after the restoration of Dutch rule. His governorship brought on a conflict in matters of colonial administration between him and his superiors. In their eyes, Van der Capellen failed to make the economy of the Dutch Indies profitable for the Dutch metropole. A friend later remarked in his memoirs that Van der Capellen’s plans could actually have brought peace to the colonies and maybe have averted the outbreak of war in Java in 1825. How much truth is there to this statement? 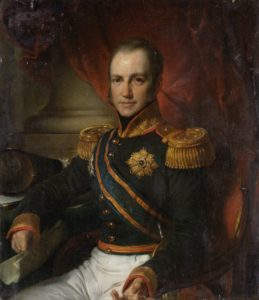 Who was Van der Capellen?

Godert van der Capellen was born in Utrecht on 15 December 1778. He received a private education before he went on to study law, first at Utrecht University and then in Göttingen (Germany), which, at that time, was a scholarly centre of Enlightenment idealism. He started his career in public administration in Utrecht in 1803. After the French occupied the Netherlands in 1810, Van der Capellen resigned from office. He was travelling around Germany when Napoleon was first defeated in 1813. He rushed home and soon – helped by family ties and friends – obtained various positions in which he assisted King William I in uniting the Northern and Southern Netherlands, including a job as a special envoy at the Congress of Vienna. Thus, by 1815, he had qualified himself perfectly for a new function within the bureaucracy of the newly independent Dutch state. One of the primary foreign policy aims of the time was the restoration of Dutch rule in the old colonial territories of the Dutch Indies. Van der Capellen soon found himself embroiled in this metropolitan effort to secure overseas profits for the new Dutch monarchy.

Great Britain, while fighting the French Empire, had conquered the Dutch colonies one by one. Britain and the Netherlands agreed on the return of most of the colonies during the London convention of august 1814. In 1816 the island of Java was handed over to the Dutch monarchy. Van der Capellen set sail to Java in October 1815 and arrived in Batavia some seven months later, in May 1816. There, the English governor general Thomas Stamford Raffles was at first very reluctant to hand over the administration to the Dutch, but the formal transfer of government finally took place on 19 August.

The first duty of the new governor general was to restore order and peace as well as generate income for the Netherlands. This combination proved to be a challenge. The British had introduced more ‘liberal’ trade policies during their rule over the Indies. Though some monopolies remained, Raffles had lowered taxes for the Indonesian people. He also had neglected the infrastructure, hospitals and army quarters. Van der Capellen mentioned that his first years in this transitive setting were very tough for him. He received little support from the motherland and was short of money to restore the derelict infrastructure on Java. By 1819, Van der Capellen had to admit that the Dutch administration had not yet reached all corners of the archipelago. There were continuous smaller and larger uprisings on the different islands, challenging the colonial government. Van der Capellen thought it necessary to clamp down on these revolts with military ventures. Yet these small wars were expensive, meaning that there was very little revenue that could be sent to the metropole.

Van der Capellen struggled with King William I’s orders on trade and profit. During a voyage to Maluku in 1824, he noted in his diary that Dutch coloni­alism ‘could no longer go forward solely with an eye to making profit, but should secure the welfare of the people and uplift them from their state of degradation and contempt’. In the same year, he wrote to the Dutch Minister of the Colonies: ‘whenever I see that in the Netherlands people understand liberalism to mean the protection of European landowners at the cost of the native population, and that the latter, who are so dear to me, are completely lost from view in order that a few [European] speculators and adventurers can succeed in their plans, then I must declare myself an ultra anti-liberal’.

His personal convictions clashed dramatically with the policy he had to carry out. Van der Capellen’s superiors wanted to stimulate the settlement of European farmers on Java and generate as much profit as possible. This collision of outlooks spelled trouble and an outburst of violence loomed. Van der Capellen noted the tensions when he visited Middle Java, where he saw how the native farmers were treated as slaves and tried to prohibit the lease of land to non-Javanese people. This measure caused a lot of upheaval, not only with the European and Chinese tenants, but also with the Javanese aristocracy as they profited hugely from this land-rent system. The lease issue hence became one of the causes of the Java War. 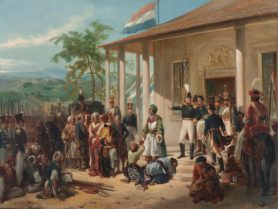 Van der Capellen’s governorship ended at the close of 1825. In The Hague there was little sense of regret to see the governor general depart at this specific moment. Van der Capellen handed over responsibility for the day-to-day administration of the Netherlands East Indies to Lieutenant General Hendrik Merkus de Kock on 1 January 1826. Upon his arrival in the Netherlands he had a lengthy conversation with King William I in which they exchanged their views on colonial rule. For King William one thing remained perfectly clear: income from Java was necessary to build the infrastructure and stimulate the economy in the United Kingdom of the Netherlands.

On the other side of the earth, the Java war raged for five years with huge losses on both sides. Afterwards the Dutch new governor general Johannes van den Bosch introduced the so-called ‘cultuurstelsel’, which entailed forcing the Javanese to produce for the European market. In the end, the Dutch Indies thus became the profit generator that William I had so desperately wished for. The Javanese peoples paid the price as uprisings and colonial wars would continue in the archipelago for more than a century.